The Rules of Bunco

Ok, first things first. There ARE NO OFFICIAL RULES of Bunco. We’ve seen lots of copies of official rules, and the rules we’ve seen are all less than 15 years old. How can you have Official Rules for a game that’s been around over a hundred years, just by making them up?

What we’ve done is gathered all the versions of the game we could find, analyzed the differences, and stripped them down to their core essence while keeping track of all the different variations we encounter.

To keep things simple, we’ve listed the core rules and the most common variations and options here. Trust us, this is just the tip of the iceberg, but it should help any group that wants to start their own Bunco group.

Of course, in the end, Bunco is what you make it. Whatever rules you want to play by is just fine. Our best advice to you is – whatever your rules are WRITE THEM DOWN – so there’s no question later.

Place three dice, a BUNCO Table Tally score sheet, and pencils on each of three tables. Place a table placard (Low, Middle, High), on each table. Place the four sequentially numbered seating placards, in front of each chair. A bell is placed on the HIGH Table. A large fuzzy die (or a small stuffed animal) is placed on the LOW table.

Players draw a score card at random when they arrive and sit in the indicated place. Partners for the first round are the players sitting across from each other.

There are six rounds in each set of Bunco. The High Table controls the pace of play by starting each round and ending each round with a ring of the bell. The scorekeeper at each table is the first to roll.

Players earn points by rolling the three dice. In each round, players are trying to roll the same number as the round, or the target number (for example, rolling

in Round 3) – sometimes called a mark.

One point is awarded for each target number rolled successfully. For example rolling

in round 1 earns 2 points, in round 2, the same roll earns one point. In rounds 3-6 this roll earns no points.

Five points are awarded for rolling three of a kind of any number except the current target number. For example rolling

BUNCO! is called when rolling 3 of a kind of the target number. For example, rolling

in Round 3. Rolling BUNCO is worth 21 points, but the player has to yell it out to get credit for it.

The player rolls as long as they score one or more points. When they fail to roll the target number on any of the dice, the dice are passed to the player on the left and the scorekeeper records the cumulative score on the Table Tally as the temporary team score.

The round is over when the HIGH table reaches 21 points, they ring the bell and the round is over for everyone. The other tables keep rolling until the high table rings the bell. They may score more than 21 points, sometimes over 100 points.

When the round ends, and players at the lower tables get to finish their roll.

Every player gets at least one roll per round.

At the end of each round the winning team from the Middle and Low tables move up to a higher table. The losing team from the High table moves to the low table. During the switch partners are changed.

Players keep track of their scores on their own BUNCO Score Card.

When a player rolls a BUNCO, that player should make a line next to the “Buncos” space on their score card. Only the player that actually rolled the BUNCO gets credit. The player’s teammate does NOT get a score.

When a team wins a round, both players record a “W” on the line for that round in that set.

When a team loses a round, they each record an “L” on the line.

At the end of the BUNCO session, all the players total their wins & losses on their scorecards for a chance at the prizes.

Tiebreakers during a Round

If both teams have a tied score at the end of a round, they participate in a roll-off. They are each allowed to roll the dice again for one session to accumulate additional points. Player #1 starts off rolling first. This player will continue to roll and accumulate points as long as they are successfully rolling the number of that round. Each player is given a session to roll and accumulate points for their team to end the tie.

Example, at the end of Round 2, a table’s teams is tied. Player #1 rolls

and accumulates 1 point. Player #1 rolls again but does not roll any

dice. The dice are passed to Players #2 – #4 who all receive chances to accumulate points.

If at the end of this session one team is now in the lead, the roll-off ends. The team with the highest score is deemed winner. If needed, additional roll-off sessions are repeated until the tie is broken.

If you choose to add TRAVELING to your game, the “Fuzzy Die” or other (preferably soft, tossable) object is added.

“Traveling” occurs whenever a Bunco is rolled. The current custodian of the Fuzzy Die throws the die at the person who called BUNCO.

The player holding the bag or object at the end of the game wins the prize!

When playing wipeout, each set is only played from 2 to 6. The ones round is skipped. During wipeout, rolling three ones

is called a wipeout, and the person rolling the wipeout loses all their points for the round (and optionally their turn) and must start over.

Traveling Wipeout is played like regular traveling, but a different soft fuzzy is thrown around and whoever holds it at the end of play gets a consolation prize.

With weighted scoring the HIGH table uses a different color pen (typically RED) to right down W’s for wins and L’s for losses. The Middle and Low tables use a blue or black pen.

At the end of play, when scores are being totaled, High table scores (red marks) count double, both as wins and losses. When totaling the score each Red W would count as 2 and each Red L would count as two. Blue and black W’s and L’s count as one each.

After anyone rolls a BUNCO, all players scramble to grab the three dice. An additional point is scored for holding each die after a BUNCO.

If you choose to set up award categories, here’s some possible categories groups have used: 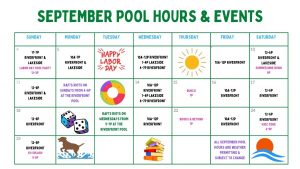 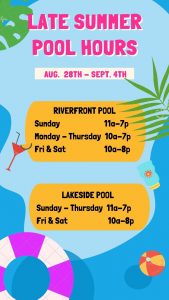 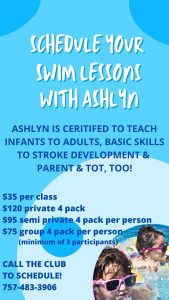 SCHEDULE YOUR SWIM LESSONS WITH ASHLYN